As you know the only rule to blogging, if such a thing exists, is to ‘hopefully’ make your posting interesting and hold a reader’s attention. With this in mind my previous posting really does help explain all and stops me repeating everything again 🙂 ….oh and sadly no Brilliant Viewpoint I’m 😀 not 007………. then again…….

Yes I work for a renowned University as a mechanical Engineer, and yes I was invited to fly as a passenger inside a military refuelling Tanker, owned by the RAF Friday last, a perk of the job so to speak, I’m the small piece in the engineering jigsaw who manufactures specimens from exotic materials so that intelligent people can destroy then decide if they’ll go inside a jet engine.

To put your jittery minds at ease, myself and colleagues take our jobs VERY seriously, and I’ve signed the Official Secrets Act.

We boarded our Airbus Voyager at Brize Norton airforce base in the heart of Oxfordshire, Google photos if you wish but all you really need to know that ‘Brize’ is the United Kingdom’s military Transport hub, with it’s impressive 1960s runways long enough for the Concorde to land (they did) both Tanker planes also airliner size transporters operate 24/7 moving munitions/troops across the Globe. Soldiers fighting in the Falklands conflict, every overseas campaign we’ve been party to have flown from Brize. Only a matter of weeks ago 30,000 refugees were extracted from Afghanistan and flew into Brize………….with it’s sprawling garrison town aside this military installation is important to UK’s defence. When Typhoon fighter jets are scrambled because a Russian long range bomber enter our airspace, Voyager Tankers are swiftly mobilised flying to the potential conflict, there role to transfer tonnes of aviation fuel into thirsty Typhoons. Jets ‘pull alongside’ lock onto trailing pipes suspended from both wings I guess no different to automobiles, before loudly turning away.

As an aside, Brize Norton was originally, as many were), a grassy bumpy field used to fly spitfires from so they could engage with Hitler’s Luftwaffe over the white cliffs of Dover…………..old Adolf never did invade Britain!

With our band of invited guests now seated at the rear of the Tanker we then taxi rumbled across the runways and made straight for the Outer Hebrides, that’s NE Scotland for you, flying at 540 miles an hour. The around trip took 5 hours in total feeding jets over Northern Island before making our way home to Oxfordshire.

Two hours pass and now in Scottish airspace a staggered procession of Typhoon fighters pulled alongside to take on fuel, id guess one strike aircraft laden with bombs now thirsty for kerosene would lock onto the trailing fuel lines, look at the photos below and in the bottom right and corner you can just make out the corner of a portal window, yes these multi million pound lethal flying hardware was a mere ten metres away, absolutely incredible not forgetting incredibly dangerous at 500 mph. Several minutes later with tanks now full they’d unlock a signal for the next jet to sweep alongside.

I’d guess these pilots were aware guests bristling with digital cameras were photographing them, occasionally the pilots would wave and after refuelling they’d glide the length of the fuselage so we could all could gaze and ‘snap’ this choreographed and much rehearsed stunning view, yes I’d experienced a once in a lifetime experience that very few are privileged to witness, and I must admit more than once I wondered what financial cost to the British taxpayer? With this hi-tech military pantomime happening each and everyday and emergency Tankers on standby…………anyways that’s human beings for you, we’re the reasons for creating conflict, incapable of ending that conflict, and spend Trillions on military hardware maintaining that conflict with never a clue how to bring about that buzz phrase “a lasting piece”………..total utter madness when you stop and think about it?

Anyways before I get carried away with my self importance here’s some photos taken on the day, incidentally the white jet stationary on the runway with the Union Jack tail wing (wait for it!) Is unsurprisingly Boris Johnson’s personal equivalent to Airforce One, owned by the MOD this jet carries our PM with accompanying civil servants as they track the globe on Official business, legend goes he personally requested the Union Jack livery after all this clown has history when it comes to painting vehicles to symbolize his damaging Brexit, remember seeing the photo of a Red Bus travelling around the UK with the slogan (a lie) £350,000,000 a day to our NHS when we leave Europe painted across its side, a sickening cynical Politian lie to hoodwink the public…………..that’s politics for you, a dirty business.

If you’re curious lol, Brize is also home to Britain’s fleet of Apache gunship helicopters also Hercules and Boeing C-17 transporters oh and home to the red berried Parachute Regiment…………..I’d guess there’s a lot more classified goings on the general public are NOT privy to, a cloak of defence secrecy we’re told is good for us!

(Note I’ve been both careful and double checked the information I’m revealing, anyone let’s say overtly interested lol will glean nothing from here…………..I have experience! A woman once tracked me down her source my WP, yeh, I know 😮 that created a ****storm I can tell you).

Yes I’m now an infrequent WP Blogger but I do like to share something interesting once in a while, oh and read blogs written by ‘middle aged women’ (only follow the ladies 😀 ) every single day!………. Anyways I have another ‘and prequel’ photo dump for you today 🙂 .

Sharing my photos is fun.

Several of my regular readers to this WP will be aware I work for a world renowned, no iconic English University, more specifically employed as a mechanical engineer. Well cutting a long story short, Oxford’s ancient thirteen or so colleges have connections with British industry dating back centuries, with a personal connection the Engineering Department has links with Rolls Royce aero engines dating back before the second world war and more recently instrumental in the development of the Turbo Fan jet engine……….when you fly by plane to holiday destinations in Hawaii or interstate destinations for work, then you’ll be powered by a jet engine whose birthplace can be traced back to Oxford University!

I could bore you with tales of Sir Frank Whittle and Barnes Wallace, ‘Trent’ and ‘Merlin’ engines…… but you’ll be relieved I won’t.

Back in the 21st Century, Oxford’s historic ties and links with brilliant men and women in hi-tech industry comes with perks, namely day trips such as yesterday’s unavailable to the general public, a fabulous day being flown the length and breadth of the UK in a Royal Air Force military refuelling Tanker, it’s role in life to fly the world’s skies transferring tonnes of aviation fuel to Typhoon air strike fighters fast running out of Gas!

Million pound hardware protecting British interests and keeping the British public safe………you have a rogue jet piloted by Muslim extremist heading for London’s seat of Government? Well the Typhoons role in life it to ‘scramble‘ intercept and kill the terrorists missile before it reaches our skies (sadly innocents of people die and that’s a tragedy), perhaps even Russian long range bombers prepared to unleash their load similar to the1940’s Blitz…………..well I’m sorry there’s no sugar coating those inflammatory statements, but back in the real world there are those prepared to die in the name of deranged twisted Religious causes and those bombs suspended below the Typhoon’s wing are there for a reason 😦 .

……..btw I’m a passivist but you’ll guess I have no problem with this, well I haven’t.

Within following posting’s I’ll be sharing many more photos taken on the day and consuming the final amounts of media memory remaining………..hmm I’m going to have to pay and Upgrade this Blog. Until next time. 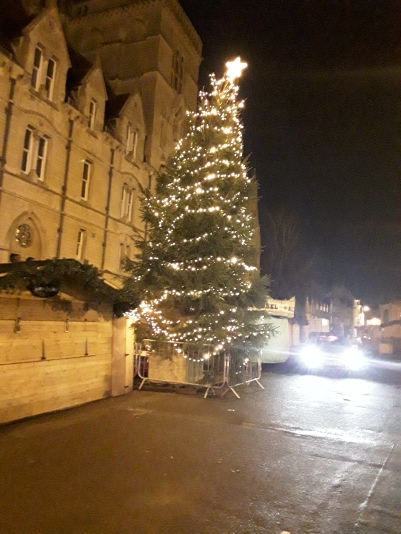 To a person all of the bloggers I follow here on WordPress have written their own Christmas themed post, and seeing as the Christmas lights in my own home Town are absolutely (blank) rubbish, I’ve photographed several trees around Oxford instead although the lovely specimen outside St. Johns college Oxford didn’t come out so well, shame really because the large multicoloured light bulbs made for a spectacular sight BUT alas not for my phone camera!

My place of employment lies in the heart of Oxford city, I’m a lucky boy because within 5minutes of leaving work I am quite literally walking amongst the dreaming spires of Oxford, magnificent buff coloured buildings with their own ‘Quads’ enclosed behind high walls. Without fail throughout summer or winter you will find trucks of equipment brought in by motion picture companies for series such as ‘Morse’, the ‘Harry Potter’ films and SO many more period dramas.

The phrase Oxford University can confuse people because no such place exists, wander the city streets in the heart of Oxford and you’re amongst Colleges dating back to the middle ages, and it’s those constituent Colleges which make up The University. As always happens wherever you live upon this planet, you take the place you live in for granted, look at my photo of Oriel College and you’ll see the entrance to a 17th Century building, itself situated upon College land that can be dated back to 1324 in the middle ages……. lol beat that you Americans 😀 , incidentally there are four other Colleges older than Oriel.

Oxford’s a beautiful city to visit if you ever get the opportunity, unspoilt Colleges museums and green parkland all protected by strict planning restrictions, and if I’m ever walking past College entrances, the fact many famous scholars have entered these oak wooden doors in their time as undergraduates isn’t lost on me, whether that be kings queens poets writers movie stars also politicians, talented minds from right across the globe have studied here and below I’ve included five famous graduates from Oriel College.

Wishing you all a very Happy Christmas, (and note I haven’t mentioned the word Brexit, hopefully in 2020 there’ll be an orderly withdrawal from Europe but I have the feeling Cameron ‘The Great Destroyer’ and Boris ‘Trump wannabe’ Johnson won’t have made that process pain free or easy…….. oh well as the old adage goes “remember, all you have to do is keep on breathing”)