(As promised I’ve a literary historical photography post for you today, yes the Great man himself Charles Dickens.)

13th APR 2019 I day-tripped to London by bus, changed onto the Underground taking the train to visit the Home lived in by Dickens for two years of his life, years later in 1925 the home was purchased then transformed into a museum, and now a ‘time capsule‘ revealing how Victorian homes actually looked inside.

The front door of 49 Doughty Street, now entrance to the museum in Dickens time owned by solicitor Henry Pickards, is a magnificent terraced residential home only 5 minutes walk from Farringdon Tube Station, comprising three floors, a scullery kitchen basement, and also a ‘loft’ we tourists weren’t allowed to ‘peek’ inside.

Read my ticket date above, “just sayin”. The map I’m also holding is printed from the internet, a free publication describing in detail ‘walking tour’ directions from Dickens Home all the way to St. Pauls Cathedral (a British jewel of historical architecture), incidentally showing a ‘route’ considerably longer than I’d first imagined!!

Alas virtually all of Dickensian London has been lost to years of redevelopment, both progress also a consequence of rebuilding this great City after 4 years of Hitler carpet bombing homes, buildings and factories by his Luftwaffe……….. what was the point to this monstrous vandalism? You tell me, on second thoughts please don’t! The truly surprising no unbelievable fact is Christopher Wren’s St. Pauls cathedral survived intact, incredible!

(There is a reason why, long story.)

On first walking through the front door to number 48, I was under no illusion I would be staying no longer than 1 hour, Dickens little known Museum is strictly for quiet thoughtful souls who wish to experience the Victorian atmosphere knowing this great man shared meals with his wife and children, wrote tales at his desk in the drawing room, endlessly climbed three flights of stairs the entire day (two up one down) and yes made love to Catherine in the master bedroom……………….. well come on yes he did!

Below you see a map essential to making ‘head and tale’ of today’s post, look carefully and both a floor showing three levels including the basement, also the various rooms inside 48 Doughty Street London, incidentally I was charged a very reasonable £9 entrance fee. Enter through blue door number 49, then once inside walk through a door into number 48 their family home.

The busy household passed back and forth on errands and social visits. Dickens often made, sometimes nightly, walks through the City he called his ‘magic lantern’. His neighbours were professionals, architects, writer and artists. yet the law courts, workhouses and slums fuelled his writing were but a short walk away.

(Remember Dickens was both a social and prison reformer, his father had been earlier locked up in a debtors prison, and Dickens would himself demonstrate outside Newgate Prison situated a mile up the road, in fact he was instrumental in having prisoner hangings moved to behind prison walls to the public’s disappointment!)

The location and grand architecture of the house was ideal for launching Dickens socially. This elegantly curved room played a key role. As a rising author enjoying his first flush of success, he entertained many leading figures here. 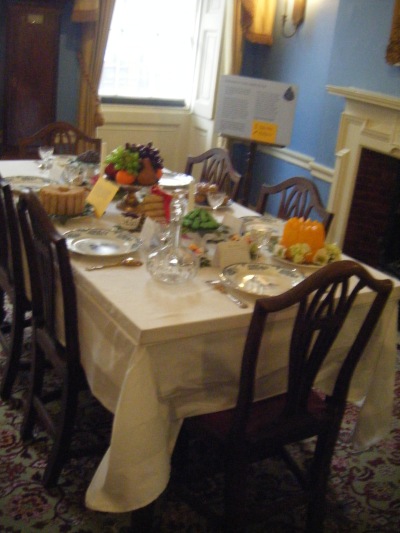 Pictured above, a dining table and bowl displaying any number of ‘plastic fruit’, Dickens bust hanging from a wall, and a lovely young lady tour guide wearing a very becoming ‘black and red’ check shirt! And yes I made a point of chatting to her 🙂 because I’m very friendly that way 😛 .

Remarking “you seem very tired” as she yawned 😮 , the young lady smiling answered “yes I am”, then standing one foot on the bottom staircase, hand resting upon the banister about to climb up, I turned grinning and said “this way to the bedrooms?” Well she actually laughed out loud finding my enquiring rather amusing (or because she was Dickens bored), all good flirty fun 🙂 don’t you think? You gotta at least try and make women laugh even if SHE IS thinking ‘jeeze he’s old enough to be my father!!’ 😀

Catherine Dickens used this family room to arrange household matters, spend time with the children, welcome visitors and write letters. As a Dickens travelled often, much of their daily communication was in writing. Surviving letters show their happiness as a couple then. 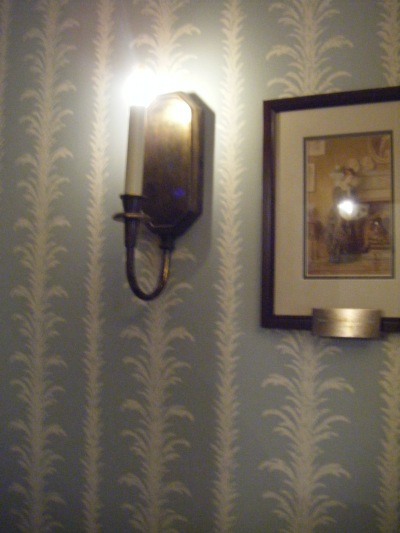 Stepping into the second ground floor room I’m now standing in Dickens Morning room, as I said earlier I wasn’t under any illusions, there’d only be so much to actually see wandering around someone else’s home, but standing in his writing room is quite a magical experience, standing affront Charles’ writing desk reading a page written in his own hand, knowing he possibly quill penned tales of Scrooge and Tiny Tim, Oliver Twist and Fagin, Pip and Miss Havisham possibly three of the greatest tales ever written, I truly sensed the standing on hallowed ground feeling or is that a little pretentious?

That desk sits affront a window probably because rays of natural sunlight are considerably brighter than the gas lights hanging from the morning room wall, I can attest to the rooms gloominess and the reason why my photos are slightly grainy……….. Tourists are banned from using a camera’s flash!

(Descend one flight of stairs into the kitchen.)

The servants prepared the family food here, managed by Catherine Dickens, the mistress of the house. Traders came in and out with supplies. Victorian Kitchens were often low lit, home to vermin, and filled with heat and smoke from the cook’s fire. 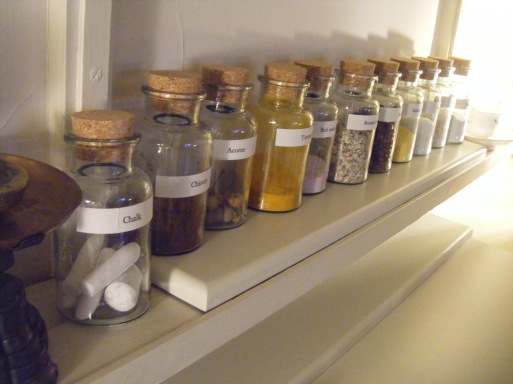 Above 5 photos: The ‘cast iron’ cooking range, a dresser displaying china plates, looking upwards through a window onto Doughty Street, looking back through a doorway towards the Washhouse, and glass bottles standing on a shelf.

…….. and who knows what evil chemicals they contained in Victorian times?

The maid washed clothes and dishes here, and cleaned around the house on a demanding schedule. Dickens’s sympathetic portrayal of servants endeared him to domestic staff around the country.

Dickens wrote about both the pleasures and harmfulness of drink. At home, he kept a good cellar to lavish his guests.

As a child, Dickens improvised performances for friends and family. As an adult, he delighted in hosting amateur theatricals. In a later home, he had a rom made into what he called ‘The smallest Theatre in the World’. From the 1850s he would take his book readings to the public stage, becoming a celebrated solo performer. 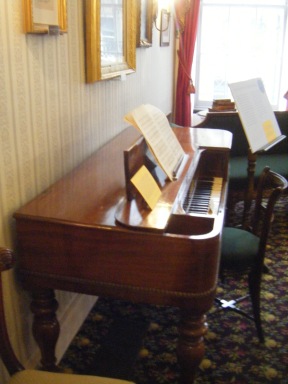 Dickens had a strict routine, writing without distraction from breakfast to lunch. Then he might visit his Club, work on one of his charitable projects or take a long walk. He filled this room with a vast collection of books.

Below looking out upon the rear garden, and at current London property market prices helped by number 48’s provenance, I’d suggest this home is worth 2 digit £1,000,000s?

Above two notable and extremely famous artist prints hanging from a wall, to the left Dickens a middle aged man seated in a chair. To the right the Ghost of Christmas PRESENT seated upon an enormous pile of presents, clutching a lantern of Christmas spirit in one hand, and lecturing Scrooge as to the error of his ways!

….………….then again he could reminding Scrooge that phantom number three, the grim reaper incarnate follows sooon!!

Below, photos pointing upwards to the master bedrooms & looking back into the Drawing room.

Dickens experienced one of the most upsetting events of his life here, the death of Catherine’s’ sister Mary Hogarth. She was s 17 years old and apparently in good health. The shock devastated the family. Dickens struggled to accept the loss of someone he considered pure and good. The sentimentality of death scenes he later wrote is rooted in that traumatic even.

While living here, Catherine Dickens gave birth to Mary and Katy. She would go on to have 10 children by 1852. Dickens separated from Catherine in1858. But when they lived here, they were largely contented and shared this bedroom.

Pictured below, and standing beside the Master bedroom four poster bed could be Catherine Dickens herself looking out the window onto Doughty Street. On the bed you see laid out garments of period clothing, whether the stockings belong to Charles or Catherine I have no idea………… but I can tell you two of their children were conceived here, yes Victorian sexual intercourse!!

Hmm pictures above remind me of that ghostly little book ‘A Christmas Carol’ once again, remember a frightened Scrooge sitting upon his four poster bed, the curtains drawn around to keep the three spirits at bay, no? Well why not go read this wonderful novel and see for yourself 🙂 .

Incidentally, I read ‘A Christmas Carol’ on Christmas Eve every single year. 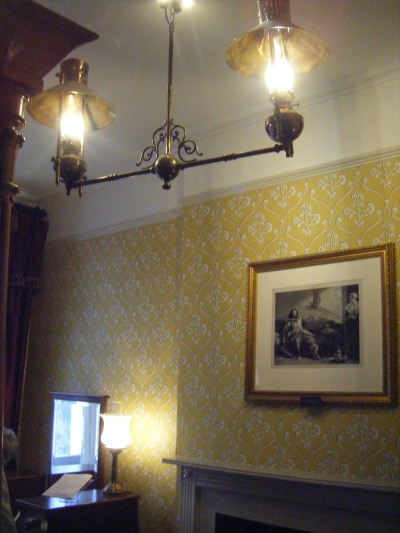 Pictured above, is yes a reflection of myself taking a photograph towards the dressing wardrobe mirror…………  alas my youthful head of hair is a ‘long ago’ distant memory!

Dickens washed, shaved and dressed here. In 1840 the historian Thomas Carlyle described Dickens as clothed fashionably rather than ‘well’. This ‘fine fellow, Boz’, he wrote loftily, has ‘clear blue intelligent eyes’ and a ‘face of the most extreme mobility’ topped with a ‘loose coil of common-coloured hair’.

The attic was the domain of the children (Charles Junior, Mary and Katy) as well as the servants, away from the more public spaces of the house.

I didn’t take any photographs of either the Dressing room, Nursery or Servants bedroom, there’s only so much culture you can ‘snap’ in one day.