….……….. 🤔now there’s a real mouthful ‘Title’ for you ty for being so patient! Being a little more precise and accurate today’s post is more a self taken ‘photo dump’, or in other words sharing pictures ‘snapped’ by me on said daytrip to GWSR’s Heritage steam attraction.

Below these 4 pics are important photos to my tale, they include day ticket to ride the line for the day, the branch map later scanned from the souvenir program and myself holding a coffee mug bought from the station shop! (Now at work). 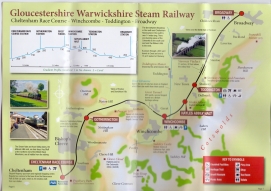 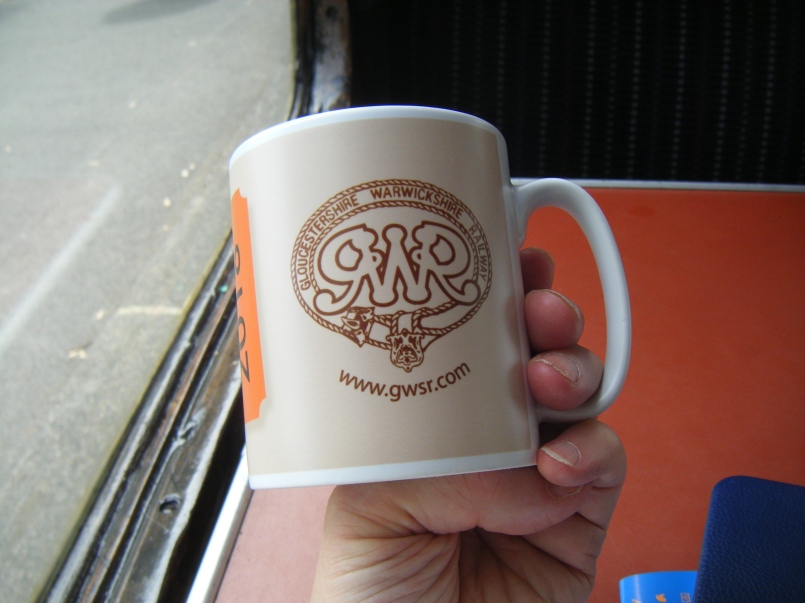 Let me begin by saying I’m quite pleased with the strip of photos below, Imagine me precariously hanging out the passenger carriage window (people have lost their heads!) taking 4 photos which when joined together make 1 panoramic scenic shot/view. 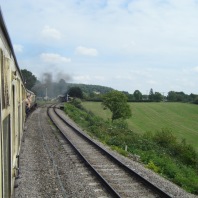 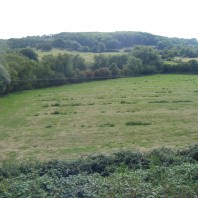 To be honest how to best approach writing this post has been playing on my mind, let me explain! There are 2 ways of writing about my day which could either be a ‘1000 word

fest’, or photographs accompanied by a brief description………… I chose the latter you’re all busy people! (It’ll morph into a descript fest I KNOW!!

(If you wish to read how and why I visited the Steam Railway situated in deepest rural Gloucester, click ‘the tale of an aborted attempt at visiting’ and ‘my own Town’s branch line now closed’ for more historical background just click!)

Below that 4 picture panoramic photos shown as individual but larger, you are looking at picturesque Gloucestershire scenery, fields of animal grazing grass.

A different view of the approaching locomotive/carriages making up a train (a technical bit of trivia there), and remember I am dangerously precariously hanging out the window, a stupid act because many years ago I dropped my glasses doing the same thing on a Scottish Heritage Line, people never learn do they?

Below Cheltenham stop, 10.30 am and my train pulls into view bang on scheduled time!

‘Built in 1919, No. 4270 spent most of her career based close to Cardiff. The heavy design with 8 driving wheels and only 2 leading wheels gave these locomotives the superb traction required to haul coal trains weighing in excess of 1,000 tons over the steep gradients of the Welsh valleys.
These locomotives almost never saw passenger service, instead running from the Valleys to the ports on the South Wales coast, day after day. Because they could only carry 6,800 litres of water, the class became known as ‘water carts’ as they would have to stop frequently to pick up water at stations.
4270 was retired in 1962 and made a final, short journey, from Cardiff to Barry Scrapyard where she was to languish until 1985. It was not however until 2014 that she returned to steam after a 4 year overhaul. She can now be found running on the Gloucestershire and Warwickshire Steam Railway’.

11 thoughts on “My daytrip to a Heritage Steam Railway…….”